I’ve found it’s better not to blame other people for things.  Either straight up IT’S TOTALLY HIS/HER FAULT, or the more subtle, quieter ways of transferring blame.

I’ve also tried to take blame when it wasn’t my fault, and I don’t recommend that, either.  I figured I could handle the repercussions better than the other person.  A friend advised that I never do that again, especially in the workplace.  I didn’t lie about it, but probably implied that whatever it was had been on me.  Grown people need to accept responsibility for their own situations, but sometimes it’s hard not to try to protect them, especially when it’s your nature to do so.

I wasn’t always that way, though.  I’m not sure exactly when I realized blaming others was a crummy thing to do, but in about third or fourth grade, I was apparently a blamer.  I was sitting next to a boy in class and bothering him on purpose….throwing bits of paper or tapping him or whatever, and he lashed out.  Of course I was doing this quietly and his outburst brought the teacher over.  And I was all 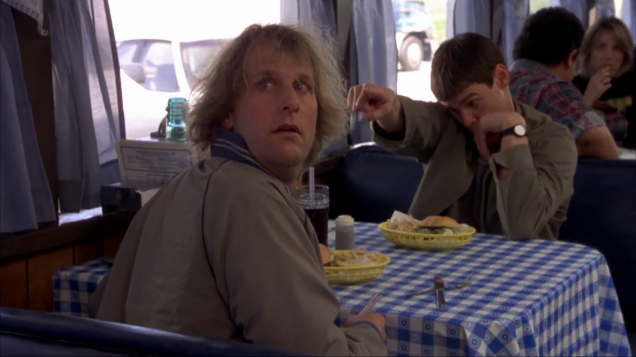 And he got in serious trouble*.  And I let it happen.  Horrible.

In the decades since,  I’ve come to realize that whatever the consequences, I cannot in good conscience blame someone else, especially if I had anything to do with the incident.  I haven’t even forgiven 9-year-old me for throwing my buddy under the bus, so I’m not going to add more shameful memories to the catalog.

This is infinitely harder when in a disagreement with a significant other.  I am still trying not to use the response of “oh yeah?  well, YOU ___________________”.  This happens naturally and is very hard to stop.  It doesn’t even seem like blame to me at the time, but more of a tool to win an argument in the heat of battle.  Still, it’s pretty weak and immature and no doubt unfair.

Nothing happened recently to bring this to mind – I just was reading something or reminiscing about my stint as a Terrible Child (this was the era before Irritable Teenager).  I also keep a list of topics that make life better for me, and this was one of the bullet points.

So, Nathan Saul, wherever you are, please accept my heartfelt apologies and I’ll totally stay inside for recess and write lines.

*This was the ’80’s, so it may have even been physical punishment.

“What can everyone do?  Praise and blame. This is human virtue, this is human madness.”   ~Friedrich Nietzsche

Start from the beginning